From the Kennedy assassination to September 11th, government conspiracies have historically captured the imagination of the public with many people believing they are true despite contradicting evidence. Several conspiracies have attracted my personal interest due to their links with the macabre, one prominent example being MKUltra. Epidemic will bring attention to physical and mental illness, as both have occurred in my immediate and extended family and I felt compelled to bring social awareness towards the topic. 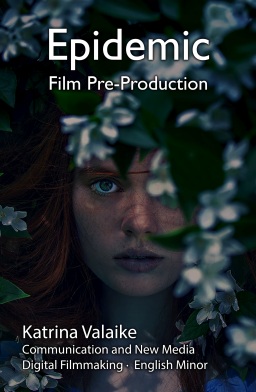 Epidemic is a psychological thriller that features an unknown disease that is infecting a small town, prior to potentially becoming a global epidemic. The main character, Emily, contracts the illness and begins to unravel a government conspiracy surrounding the creation and spread of the disease.
The film explores the will to live of the victims of the disease, as they know there is no known or available cure for the public. The federal government, in an attempt to cover their past mistakes, tries to create a cure to prevent future strains of the disease. They perform experiments on unwilling participants, like the Tuskegee Syphilis Study, where the ethics of human experimentation are ignored completely.

I started working on my script over the summer, meanwhile I was limited in how quickly I was able to work due to not having Final Draft 9 on my personal computer. Throughout the semester I completed six drafts with the seventh being the final version. This would take me to around Midterm as I was attempting to turn this into a full-fledged film.
I downgraded my capstone to solely work on preproduction at this time due to not having outside support for actors. Since then, the project became more manageable with my schedule. Afterwards, it was just getting the storyboards and character profiles completed. In the following week or two, I discovered free (but finicky) software that helped me with storyboarding called Storyboarder made by Wonder Unit.

The script was refined from 20 to 18 pages with at least 100 frames of storyboard produced in Storyboarder. I am extremely proud with what I was able to produce this semester, although it was not the full vision that I had planned on. This will likely change in the future as I am going to continue the project after the semester has ended, I want to achieve that original goal that I had set myself.

View the progression of my project on my blog.