Hello! My name is David Donohue. I'm a graduate of Shepherd University's class of 2016 and current Brooklyn, NY resident. I graduated with a Bachelor of Arts degree in Communications and New Media with a minor in Music. As both a Communications major and intern, I received some excellent instruction in the fields of video production, sound design and media writing. My current objectives are to find employment as either a sound designer, public relations worker, or videographer. I am also considering graduate studies in the very near future.

This semester saw the completion of my senior capstone project, a must for every Shepherd student in order to graduate. If you’re a Communications major, this requires you to develop, propose and execute a project that showcases the skills you’ve honed the past couple of years. Depending on your concentration, and per the department’s approval, this can mean virtually anything you seriously want to do can be used for your final capstone project. END_OF_DOCUMENT_TOKEN_TO_BE_REPLACED

Hello! I’m David Donohue, a current fourth-year student in the communication department here at Shepherd University with a concentration in Digital Filmmaking. Currently, I’m also an intern at Shepherdstown’s own Freshwater Institute, a research facility that is part of the environmental conservation group The Conservation Fund. I have been employed there since June of last year.

Unlike most of The Conservation Fund, the Freshwater Institute does not specialize specifically in land conservation efforts. Rather, it specializes in scientific research aspect of the fund, with a focus on sustainable aquaculture, or the raising of fish in land-based aquaculture systems. The Institute is also involved in water-quality experiments and Conservation GIS (evaluating areas with geographic information systems). This is my second internship as a college student, the first being at another Shepherdstown-based environmental group called Skytruth. Both of these opportunities have afforded me some amazing experiences, but my employment with the Freshwater Institute has been especially unique in that I’ve applied virtually everything I’ve ever learned in college. So while it might be tough to stay on top of Dr. Kushin’s workload, or keep track of Dr. William’s schedule, trust me: it does pay off. How? Let me give you some examples.

COMM 352 Computer-Mediated Communication
One of the coolest but toughest classes we deal with as Comm majors is without a doubt COMM 352 Computer-Mediated Communication class; you probably remember it as the class where you somehow pulled together a website in the middle of finals week against the challenge of a missing dash in the html code. Well, believe it or not, html is king in the design world. Since I started at my internship, I’ve designed around 40 different web pages for our company website using an application called WordPress. Here’s a screenshot of what these pages look like before publication: 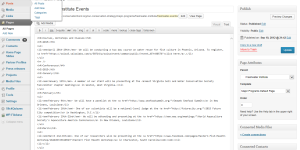 Once I’ve typed in the coding and pasted in any writing I’ve done outside of WordPress, I send a copy of the draft to my boss for review. Once approved, we hit the publish button, and boom. We have a brand-new webpage:

COMM 360 Studio Production and COMM 406 Advertising & Imagery
Both Dr. Williams and Professor Larson are synonymous with some of the toughest courses offered within our major. Dr. Williams tends to try to foster a dive-in and sink or swim approach, while Professor Larson emphasizes looking at the problems discussed in class from different angles. What two of the classes I’ve taken with them share in common is the inclusion of video editing. While there are many different types of video editing software, the trick is in knowing what each has in common; this allows for easy transition between platforms. Though my main work in these classes was in Final Cut Pro and iMovie respectively, it allowed me to transition to what I use at my job; Adobe Premier:

The editing process for a video can be really tedious; on the particular video in this shot, I spent almost a month straight of editing and priming the footage. The result, however, was well worth it. Take a look at the completed video below.

COMM 355 Writing Across Platforms
As you know, we’re required to take a writing credit specific to our major; this is either Narrative Screenwriting or Writing Across Platforms. Due to my personal interests, I took the later class. All I can say is, Dr. Kushin knows his stuff, and this class was one of my personal favorites. At my job, I’m required to maintain a constant presence on a variety of media outlets. Chief among these is Internet media, as I’m the social media custodian and develop a majority of the Institute’s webpage, but I’m also involved in other aspects, such as press releases. For example, I developed the following press release for a conference we had last August:

Using the tools I’d learned in the class, I wrote up the release with all the necessary ingredients and got it out to our usual reporters. Due to schedule conflicts, I couldn’t do much more than this, but when I came back to the office the following week, we had a news article live:

Overall, the department prepared me well for what has been one of the most exciting opportunities in my career so far. The family we have in this department, along with the immersive aspects of our classes, has helped me make the transition into a real-world job with real career aspects. I can honestly say that if it wasn’t for the classes I took as a communications major, I would not be even close to where I am now. Editor’s Note: The Department has switched from Final Cut Pro to Adobe Premiere.